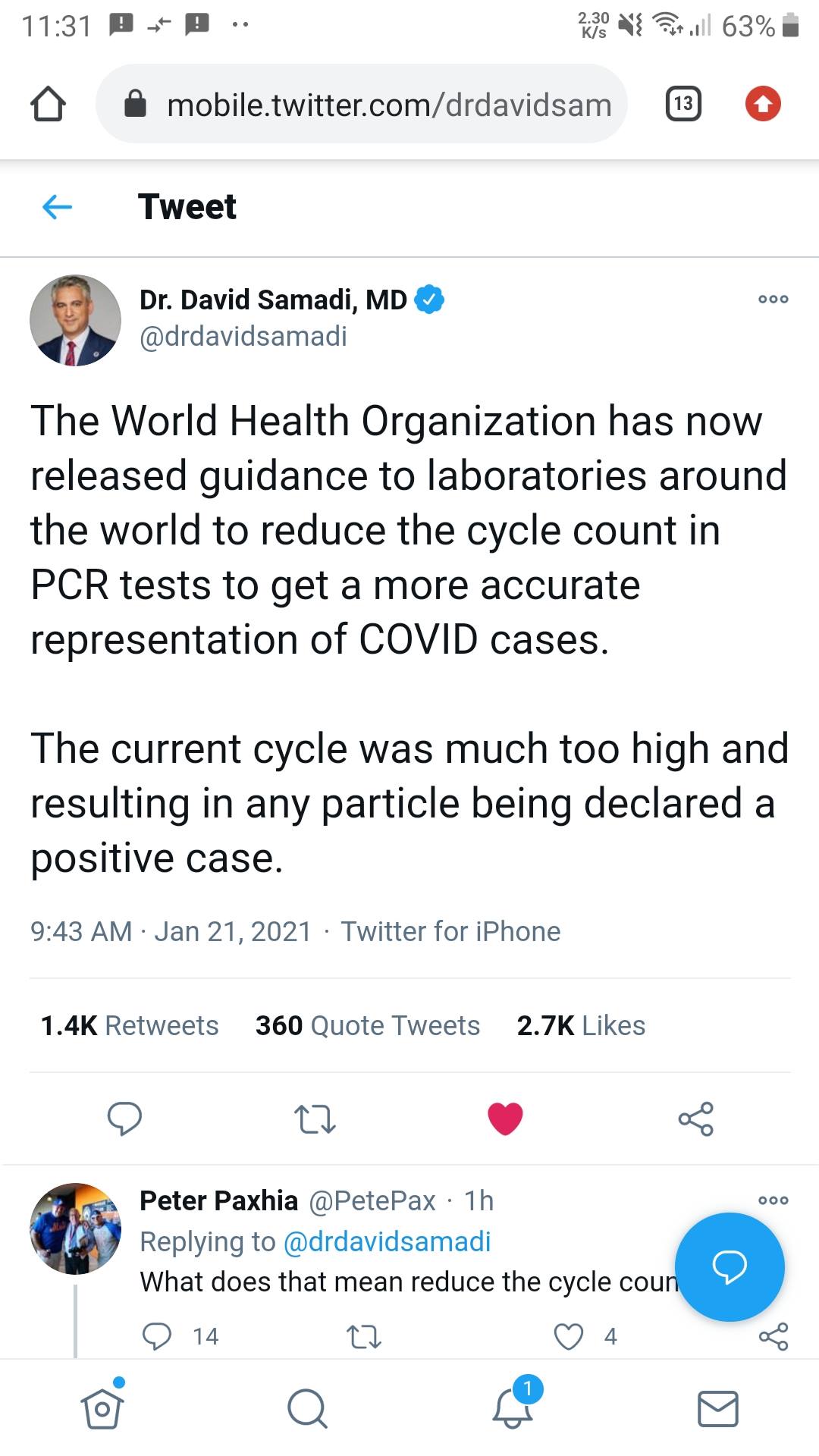 Ever since the pantomime plague began, your local friendly crazy quackaloons have been telling you the diagnostic test isn't fit for purpose and creates false positives, due to results being amplified too many times.

Now the WHO states the diagnostic test isn't fit for purpose and creates false positives, due to results being amplified too many times.

), I will explain again what the PCR test does: it detects genetic sequences of viruses, but NOT viruses themselves. The more amplification cycles a test result goes through, the more genetic sequences it detects. As we all have all sorts of genetic debris floating about inside of us, then - to quote the inventor of the PCR test - "anyone can test positive for anything with the PCR. It doesn't tell you you're sick."

(Read this salutary tale from 2007 for what happens when PCR tests are inappropriately used to diagnose infectious illness: https://www.nytimes.com/2007/01/22/health/22whoop.html)

So, if you happen to be in the midst of orchestrating a pretend plague and want to create a lot of "positive cases" to terrify the masses, you just amplify the PCR test results a lot of times. Have you noticed how the propaganda press is always going on about rises in CASES? Not deaths. Not hospitalisations. Not even the sniffles. Just "cases". A "case" is a positive PCR result, and hence, in reality, meaningless. It doesn't tell us anything about whether more people are ill or not.

Nevertheless, most people take headlines at face value and don't and can't think (critical thinking having been intentionally axed from the national curriculum years ago), so they believe an explosion in "cases" a pandemic makes. Oh, but you know someone who was really sick "with Covid"? I'm heartless for denying its severity? Look: I don't deny you knew someone very sick. They may even have died. But elderly and unwell people, and sometimes younger people, do die. It's tragic, but it's life. In normal circumstances, 1,600 people die every day in the UK alone. That number hasn't significantly increased. Just because they "tested positive" on an unfit-for-purpose test shortly before their death does not prove they died "from Covid", and it certainly doesn't prove there's a pandemic.

The PCR test has been used to create the illusion of a pandemic to manufacture your consent for a variety of draconian and authoritarian measures that you never would have accepted unless you had been scaremongered into compliance. The best way to control people is to scare them - all repressive regimes know that.

But - now we have the miraculous saviour vaccine, so the propaganda angle has got to change.

Hence - the WHO is now telling labs across the world to reduce the number of  PCR cycles. This means a dramatic decrease in positive test results, which will be used as "evidence" the vaccine is working.

Meanwhile, as bad reactions to the experimental gene therapies being marketed as vaccines mount up, this will be used as evidence for why we need to keep the restrictions, as bad vaccine reactions will be blamed on "the virus mutating" and as evidence we don't have "herd immunity". We will be told new and different vaccines are needed every six months or so to fight the never-ending "new strains".

So, both restrictions and vaccines will go on and on and on. This will last until at least 2025, by which point, you will have been fully and irreversibly re-engineered, to be terrified of other people, to eschew all physical contact, to smother your airways and hide your face, and to view your fellow human beings with deep suspicion and hostility, snitching to the authorities if they break "the rules", and viewing them as nothing but filthy disease vectors and potential mass murderers. That's if you survive the next five years, of course, which, if you keep getting vaccinated, is not necessarily very likely. - especially if you're older and/or have existing health problems.

That's the future in store for you if you keep believing the execrable and mendacious lies being fed to you by your government, and their state propaganda organs "the press".

Yes, I know I'm just a crazy conspiracy theorist, and why should anyone listen to me? But you know what the biggest conspiracy of all is? Believing the Government has your best interests at heart.

Oops, you forgot something.

The words you entered did not match the given text. Please try again.

Has the content on the site been helpful? Please consider supporting its creator via a donation